I received this succulent as a gift from a dear friend of mine right after I had my 11th hip surgery this past February. 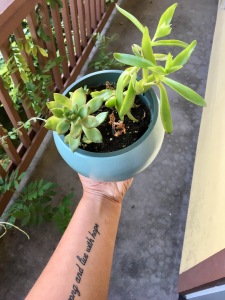 At first, I didn’t think too much of it. Usually after I have a surgery, I receive flowers and/or cards. After 11 times, I am pretty use to the routine. This plant was different, though.

Months into having it, it quickly began to die. It turned brown and parts of it began to fall off. I had no idea how to care for a succulent. It was dying.

About a month or so ago, I remember being on the phone with the friend who gave it to me. I told her it was dying and it wasn’t going to make it. She said, it didn’t cost much and she could get me a new one.

I don’t know what it was, but after I heard I could buy a new one, something in me told me to try and save this little plant. I did my research on succulents and figured out how to properly care for them.

I was determined to bring this plant back to life. I have spent so much time caring for it, making sure it has enough water, but not too much to where it drowns. Sunlight, where it is allowed to feel the warmth on it’s arms, but not to where they burn. I was not giving up on this plant.

When I look at this succulent, I see so much more than it just being a plant. She is a fighter and she didn’t give up on being made new again. She reminds me of myself, bruised and battered, and worn from the events she has been through in life.

When I look at her, I see strength. I see beauty. I see a fighter. I see love. And I am also, reminded of the dear friend who gave it to me, who has not given up on me.

I didn’t realize how much this succulent would mean to me. Without the love and time I have given her, she would not have survived. I wasn’t just going to give up on her. She needed to be given a chance and shown love.

In a few weeks, I will be moving back to my hometown. My little succulent will be coming with me and adventuring on a new chapter in life. There is beauty in the littlest of things, you just have to find it. My succulent and I are going to be just fine.